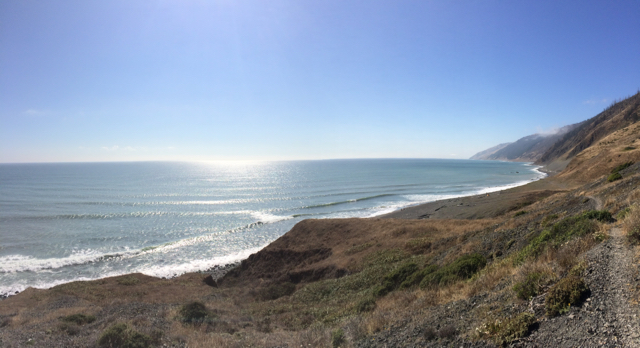 This time last week, I was hiking the Lost Coast trail, a 24.6 mile stretch of seaside and beach trail in the King Range National Conservation Area, which is managed by the BLM Arcata Field Office. Whenever anyone would ask how it was, my synopsis was this: “It is unreal how beautiful the Lost Coast is.” Not the most elegant phrasing, but the honest truth. Enjoy the pictures my friends, and if you like to backpack, put this trail on your bucket list. 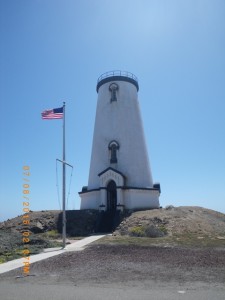 On July 8, I had the pleasure of touring the Piedras Blancas Light Station along with BLM office newbies and interns. This even counted as work! #LivingTheDream 🙂

The light station is a focal point of the Piedras Blancas Outstanding Natural Area, one of the special management areas within the Bakersfield Field Office jurisdiction. (This is why it counted for work.)

As BLM-insiders, we had the VIP opportunity of climbing to the top of the lighthouse – very windy up there!

In the background of the above photo, you can see one of the Piedras Blancas, which translates to “white rocks” in Spanish. The rock acquired its whitish hue from centuries of guano deposits, or in less technical terms: seabird poo.

These large offshore rocks provide excellent refuge to marine animals large and small. While we were at the Light Station, we saw:

We also saw sea otters, but I was not able to get a picture this trip. I will definitely be back. For more history of the light station, you can visit piedrasblancas.org.  – or you can visit me and I will take you there!

For the Fourth of July weekend, a big group of friends and friends-to-be came together at a group campsite in the Mendocino National Forest.

There was a forest… 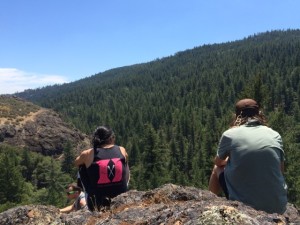 and fires, though thankfully not together. 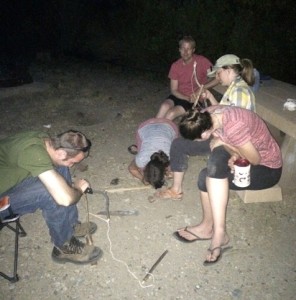 In the photo above, we are attempting to start a bow fire, which is not a fire started with a bow and flaming arrow, as I had thought. That would be far too dangerous as California is a tinderbox.  No, it was a more advanced version of rubbing sticks together. We did get them quite hot, but alas, no flames. Next time.

There was a lake in the forest.

I greatly enjoyed swimming with my pool noodle; my $4 floaty both solved my inability to float unsupported and my dislike of weedy lake bottoms (because now I floated well above the vegetation). On the far shore of the lake there was a rope swing, which is where the “flying feats” occurred.

Overall, it was a great weekend with friends, and I was sad to part ways. 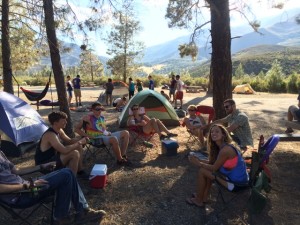 Then, as if my car heard my wish and decided to take matters into its own hands(tires) by delaying our departure, my tire picked up this epic rock*: 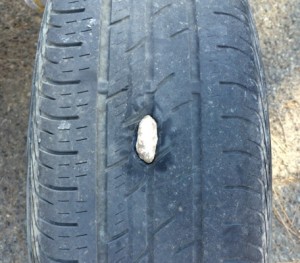 But like the haiku said: “fun forfends flat funk” or, in other words, “flat won’t foil this fun!” 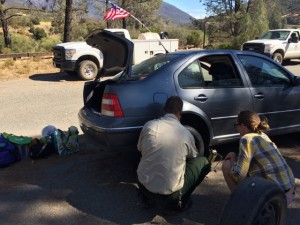 With the help of the friendly Forest Service employees, we had the spare on in no time. We like to think they saw the American flag on my radio antenna and knew immediately they were needed.

Oh, and an In-N-Out burger on the way home is also a flat-funk-fixer-upper! Yum, yum, yum! 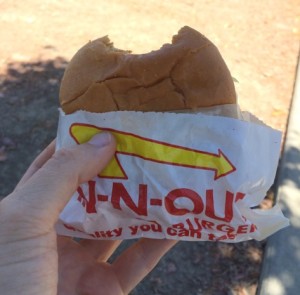 *I kept the rock after it was removed from my tire, and it is far less epic than this picture implies. Seeing it here, you would imagine no less than a prehistoric spear tip, but it is quite dull. On the plus side, I have new tires, and I am ready for more adventures!