Two years ago, I bonded with a group of amazing people on an unlikely adventure. I knew volunteering at SANCCOB, a seabird rehabilitation center outside of Cape Town, South Africa, would be an experience, but I had no idea I would make lifelong friends and two years later reconnect with three of them – Laura, Eve, and Annmarie – in their home countries. Here is the picture diary of our reunion:

(Housekeeping update: Post on the conference is coming. I am still processing the experience.)

I thought it would be appropriate to start with pictures of us from two years ago.

At noon on Thursday, I met Laura and Eve at the Oxford train station. Seeing friends from two years ago was a bit surreal, but also oddly normal. Because we are able to stay in touch through Skype, Facebook, WhatsApp, etc. I did not have the same sense of ages passing since we had talked. This allowed us to fall into very typical conversation: plans for after university, recent movies, Britain vs. American-isms. Nevertheless, it was a pleasure sit across the lunch table and converse as though this was an everyday occurrence.

After lunch, we took a stroll around Oxford. I had heard from one of the conference attendees that parts of the Harry Potter movies were filmed at Christ Church College, so we directed our walk on that knowledge.

Just a few hours after reuniting, we went our separate ways. Next stop, North Wales and Annmarie Rebecca Dodd!!!

After the pub, we retired for the evening and had plans for a full day on Friday. 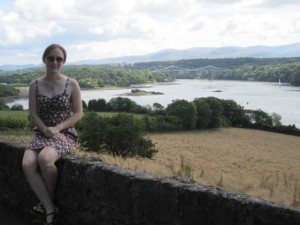 After breakfast, the beach, long word, and the bridge, we traveled to the National Zoo of Wales. In theory, I think it is a bit odd to visit a zoo on vacation, but in practice, I have done it several times. There is some attraction that I cannot explain. At any rate, we attended all of the activities: Chimp Encounter, Seal Training, and Penguin Parade (of course!), and we saw almost all of the animals. It was a jolly good time.

After the zoo, we went to the nearby seaside town to have a quick look around.

We also found an unexpected difference between the US and the UK: gambling. We visited a small “arcade” that had games of chance to win money. Based on what Annmarie said, these are common and there is not the same level of regulation that we have in the US. I also explained the US version of an arcade only includes games where you can win tickets to buy prizes, but not actual coins. The wonders of traveling abroad! We lost the ten pence Annmarie provided, but it was good fun.

After a full day, we traveled back to Rhosneigr for dinner with Billy at a delicious restaurant on the main street. My brie, cranberry, and mushroom wellington was delicious and the chocolate fudge cake was too good for words (or pictures, as it was gone before I thought to take one).

More than satisfied, we ventured back to Annmarie’s house to use the internet for some trip planning, then it was time for bed.

In the morning, we had a short lie in before returning to Annmarie’s house for a shower and a family introduction, then it was off to the train station. We moved quickly because there was a train leaving at 10:18 and the next was not until just after 11:00, either would have been fine, but the earlier one would give me a touch more of the day in London. Thankfully we were granted many green lights and little traffic. I hopped on board with only a few moments to spare, but little time for goodbyes. It was the cake isle in South Africa all over again! But perhaps there is something to be said for not dwelling on the departure, after all, it is only a temporary separation 🙂

See you in America in two years (or sooner) Annmarie!