On Saturday, February 28, David D. and I visited North Table Mountain Ecological Reserve located near Chico, California.  The reserve is known for its annual wildflower display, and it did not disappoint. I hope we can return in the coming weeks to see what new flowers are making their appearance. I would also encourage you to seek out wildflowers in your area when the time is right. There is something magical about seeing a hillside painted in color by a vast number of flowers, particularly ones that have not been planted or tended by human hands.

Disclosure: my wildflower identifications are my best guess.

Nesting great horned owl’s
yellow eye speaks without sound,
‘I am watching you.’

Observing wildlife is one of the chief perks of my internship, and seeing this – my first owl in California – was unforgettable. When that yellow eye fell upon me, I felt my heart jump. I had the sense that the owl was looking straight into my soul, an unnerving and exhilarating experience.

What also struck me was the nest, how well camouflaged it is and how dense the vegetation is around it. I know owls are agile flyers, but to navigate through the needles and branches to this site without rumpling feathers seems impossible. Perhaps the view is more open from above? Or perhaps my raptor nest blueprint needs revising? My framework is based mostly on Michigan bald eagle nests, which are large and obvious from a distance. The great horned owl bird cam in Savannah, Georgia that I have been watching seemed to confirm this would be true for large owls too, but given this nest, I think I must reconsider. Thankfully, this opens a whole new world of possibilities for nest sites! 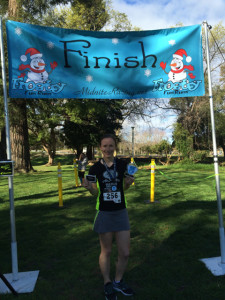 The Frosty Fun Run Championships took place on Saturday, February 28, and I brought home the gold. This was an eight-race, Saturday morning series with courses ranging from 3.7 miles to 5.5 miles. Participating was a fun way to meet community runners – I was the girl the guys didn’t want to lose to – and to test my speed. I joyfully represented The Banditos (I wish “Banditos Represent!” was five syllables), and look forward to running with them in two weeks for the Palmetto 200. Super pumped!

Next chapters revealed.
THE overarching question:
Will it all fall down?

I thought I would address the delay between recent posts: House of Cards, Season Three was released on Friday, February 27, and my discretionary time was immediately prioritized to include one (or three, but who’s counting?) episodes every night. This in addition to running, yoga, and trivia meant blogging would have to wait, but I am glad to be back at it.

Natural beauty
of Northern California –
the place I call “home.”

This post is really about the pictures. Before I moved, my east coast friends would ask me where I was going, and I would tell them Redding, California. They replied with a blank look. Then I would say “it’s in Northern California,” and the immediate response was: “Oh, it’s beautiful!” They spoke the truth.

I have included the dates because this is also a celebration of California weather. 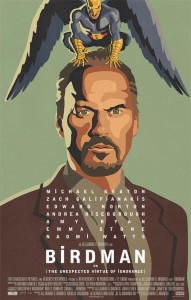 When our plan to see American Sniper was foiled by a sold out show, we decided to see Birdman instead. I had been on the fence about seeing it, but given the situation, and in light of its Oscar nomination, I was willing to try.

The movie is strange from start to finish. Surreal moments of telekinesis and imagined movie plots are woven into the larger movie fabric, leaving you to ask: did that really happen? With movies such as Beasts of the Southern Wild, this approach has left me feeling disconnected and confused, but this time, I left the theater feeling mostly entertained and like I “got it” a bit more.*

Another feature of the movie that set it apart from many others I have seen was the camera work: the angle and movement gave the impression that you were on the set, another actor/professional in the theater. I enjoyed moving through the backstage labyrinth of the theater in this way, and it felt right given the strangeness of the movie.

My overall impression of Birdman was it presented the driving desire to be recognized and special in a world where we are mostly irrelevant and unknown. It literally gave voice to the ego of the main character, and who hasn’t experienced a nagging voice in their head? I also appreciated the diversity of the relationships between the characters; they were all over the map. I’ll be thinking about this movie for days to come, and though it does not make my all-time favorites list, I am glad I saw it.

*I think this was partly to do with having watched Birdman in the theater where there were almost zero distractions compared to when I watched Beasts at home.

Monday, February 2: from where I placed my yoga mat for class, I was able to watch the low clouds drift over nearby ridges and valleys. The calming effect was greatly appreciated after a busy week and weekend. I was also pleased to note the lengthening daylight hours that made the view possible. I wish I had a picture to show you; instead, I would like to encourage you to go out and see the clouds – and sky, and sun, and moon – sometime this week.

I published my previous post from the Western Section conference over a week ago, and at the time, I had every intention of summarizing the conference in a haiku. Since then, I have realized the experience was just too big and too varied to squeeze into 17 syllables (nor was I keen on the idea of writing multiple haikus, because how would I pick which experiences to highlight?), so I will say this: I had a phenomenal time. This was by far my favorite conference experience because for the first time, I felt like I truly belonged, like I was among “my people.” I made connections with professionals that I hope to maintain and grow throughout my career. I left feeling excited by the possibilities and the future. I hope this was only the first of many Western Section conferences.

Have a great week!